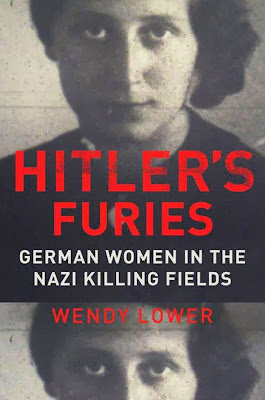 "It’s a testament to Hannah Arendt’s Eichmann in Jerusalem that 'the banality of evil' remains one of our most enduring clichés, a convenient shorthand not only for bureaucrats but any 'ordinary' person complicit in a state’s war crimes. For readers of Hitler’s Furies, Wendy Lower’s chronicle of German women’s participation in the Holocaust, this trope is especially alluring. Like the subject of Arendt’s book, many of these women were 'desk murderers' — secretaries and administrators whose weapon was not a Luger or a gas chamber but a typewriter used to execute Hitler’s Final Solution.
And yet despite these similarities, the analogy ultimately proves imperfect. Unlike Arendt’s portrait of Adolph Eichmann, itself challenged by academics like David Cesarani, Hitler’s furies were not ideologically neutral. Neither were their crimes confined to an office or a classroom. As Lower reveals in chilling detail, they were also capable of the same savagery as their male counterparts — a fact often overlooked by Holocaust scholars and historians."
— Jacob Sugarman, Salon
Read more…
Posted by Elora Writers Festival at 2:32 PM