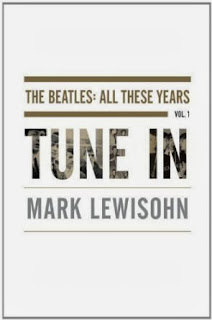 "Mark Lewisohn's new book Tune in is the best part of 1000 pages long. The product of at least eight years' writing and research, and full of information sourced even before that, it runs from the band members' family prehistories to the release of their first proper single in 1962. Two further volumes will appear, all under the umbrella title All These Years. Should you have £120 to spare, each book will also be published in an extended special edition which includes 'hundreds of thousands of words of extra material, as well as many extra photographs.'
This is the story told in Proustian detail: we will presumably at last know what Lennon actually shouts at the start of 'It's All Too Much,' the history of a company owned by Ringo Starr called Bricky Builders and the full life-story of McCartney's sheepdog Martha. I have been a Beatles obsessive since the age of seven, but even for people like me, this all sounds as if it might be a little unnecessary.
The first edited-down volume, though, is largely a delight, and the story is told so definitively that, after this, that really should be it. Secondary sources are comprehensively mined; letters, public records and business documents have been found in places no one else ever thought to look; friends, associates and acquaintances have been interviewed over what seems to be a quarter-century. All that is lacking is substantial new testimony from the Beatles themselves, a point to which there are two responses: first, that the two most candid and iconoclastic Beatles have been dead for a number of years; and second, that the last people you should ask about the detailed history of the Beatles are the Beatles themselves."
— John Harris, The Guardian
Read more...