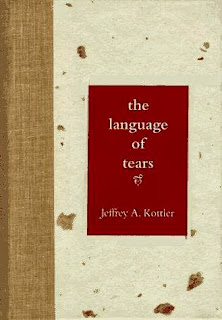 "There are many theories about why humans cry ranging from the biophysical to the evolutionary. One of the most compelling hypotheses is Jeffrey Kottler’s, discussed at length in his 1996 book The Language of Tears. Kottler believes that humans cry because, unlike every other animal, we take years and years to be able to fend for ourselves. Until that time, we need a behavior that can elicit the sympathetic consideration of our needs from those around us who are more capable (read: adults). We can’t just yell for help though—that would alert predators to helpless prey—so instead, we’ve developed a silent scream: we tear up. […]"
— Elijah Woolfson, The Atlantic (via the New Shelton wet/dry)
Read more… 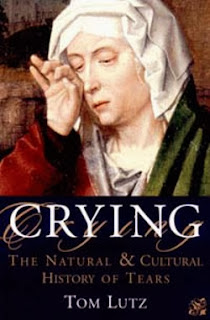 "Tom Lutz has managed to stuff hundreds of factoids about crying into Crying: The Natural and Cultural History of Tears—everything from a hilarious explanation, circa 1579, of the brain being the source of tears ('when the brain is compressed it ejects great quantities of tears'), to a paragraph on the topic of Bill Clinton's crocodile tears. In fact, brain compression is precisely the effect of reading Crying, though Lutz's factoids, contrary to the 1579 theory, don't cause the reader to manifest Squirt-Gun Eyes. One does, however, feel glimmers of an illumination about the mysterious topic of shedding tears that never comes to pass.
Many of the passages revolve around the Woman Are From Venus, Men Are From Mars axis (the author, to his credit, never actually quotes from that book), providing examples from various cultures where woman are expected to cry and men aren't, and vice versa depending of the circumstances. For example, Jackie O. doesn't cry at JFK's funeral, but Bob Dole cries at Nixon's funeral, and both are thought to be appropriate responses based upon a shifting set of cultural expectations."
— Sidney Moody, The Austin Chronicle
Read more...

Buy both these books here...