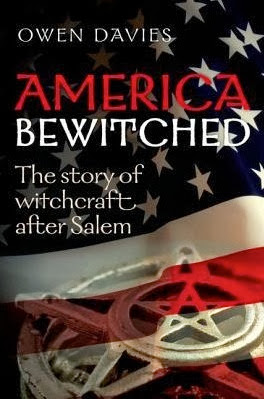 "In the young-adult section of bookshops, shelves that recently groaned under the weight of tales of tormented vampires and lovelorn werewolves, are now stuffed with stories of witchcraft and magic, from Ruth Warburton's much-praised Winter Trilogy to Jessica Spotswood's Cahill Witch Chronicles. Lower down the age range, last month the most recent in Jill Murphy's long-running Worst Witch series was published, while among the predictions for this Christmas's bestselling toys are the Bratz spinoff, House of Witchez. For adults, next year will mark the climax of Deborah Harkness's All Souls Trilogy, centring on the relationship between a vampire and a feisty American witch.
However, it is on television that the season of the witch has truly taken hold. In addition to 'American Horror Story,' with its tale of voodoo queens and teenage witches, there's Lifetime's 'The Witches of East End,' adapted from a novel by Melissa de la Cruz and featuring a family of spellcasters led by Julia Ormond.
'Vampire Diaries' spinoff 'The Originals' (on the Syfy channel) has a central storyline about witchcraft and in Universal's 'Sleepy Hollow,' Ichabod Crane deals with duelling covens in present-day America.
So why witches – and why now? 'The idea of being able to manipulate supernatural forces still resonates,' says Owen Davies, professor of social history at the University of Hertfordshire and author of America Bewitched: The Story of Witchcraft after Salem. 'Witches and ghosts speak to something fundamental and innate in our psyche. It's an emotional connection.'"
— Sarah Hughes, The Guardian
Read more...

Buy all the books mentioned in this post here...
Posted by Elora Writers Festival at 9:08 AM