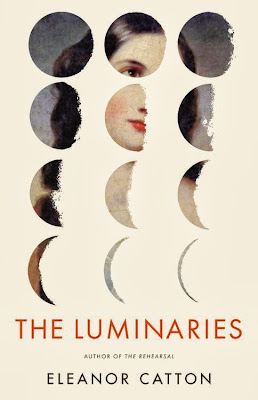 "Youth and heft triumphed at the Man Booker Prize on Tuesday, as 28-year-old New Zealand author Eleanor Catton won the fiction award for The Luminaries, an ambitious 832-page murder mystery set during a 19th-century gold rush.
The choice should give heart to young authors of oversized tales. Catton is the youngest writer and only the second New Zealander to win the prestigious award — and her epic novel is easily the longest Booker champion.
Travel writer Robert Macfarlane, who chaired the judging panel, called The Luminaries 'dazzling' and [predictably] 'luminous.'
— Jill Lawless, Salon
Read more…

"'I have observed that male writers tend to get asked what they think and women what they feel,' [Catton] says. 'In my experience, and that of a lot of other women writers, all of the questions coming at them from interviewers tend to be about how lucky they are to be where they are – about luck and identity and how the idea struck them. The interviews much more seldom engage with the woman as a serious thinker, a philosopher, as a person with preoccupations that are going to sustain them for their lifetime.'
And then there is the question of her youth. Though generally well-received in Britain, The Luminaries, she said, was subject to a 'bullying' reception from certain male reviewers of an older generation – particularly in her native New Zealand. 'People whose negative reaction has been most vehement have all been men over about 45,' she says.
'One of those things that you learn in school about any kind of bullying is that it's always more to do with them than it is to do with you. I don't see that my age has anything to do with what is between the covers of my book, any more than the fact that I am right-handed. It's a fact of my biography, but it's uninteresting.'"
— Charlotte Higgins, The Guardian
Read more…

Buy all of Eleanor Catton's books here...
Posted by Elora Writers Festival at 11:41 AM