"Canadian media scholar Darren Wershler, who has been making some unexpected connections between meme culture and contemporary poetry.
'These artifacts,' Wershler claims, 'aren’t conceived of as poems; they aren’t produced by people who identify as poets; they circulate promiscuously, sometimes under anonymous conditions; and they aren’t encountered by interpretive communities that identify them as literary.' […]
Wershler calls these activities 'conceptualism in the wild,' referring to the aspect of nineteen-sixties conceptual art that concerned reframing, and thereby redefining, the idea of artistic genius (think of Duchamp’s urinal). Conceptual projects of the period were generated by a kind of pre-Internet O.C.D., such as Sol LeWitt’s exhaustive photographic documentation of every object, nook, and cranny in his Manhattan loft, or Tehching Hsieh’s yearlong practice of taking a photo of himself every hour, on the hour.
Today’s conceptualists in the wild make those guys look tame. It’s not uncommon to see blogs that recount someone’s every sneeze since 2007, or of a man who shoots exactly one second of video every day and strings the clips together in time-lapsed mashups. There is guy who secretly taped all of his conversations for three years and a woman who documents every morsel of food that she puts into her mouth. While some of these people aren’t consciously framing their activities as works of art, Wershler argues that what they’re doing is so close to the practices of sixties conceptualism that the connection between the two can’t be ignored. 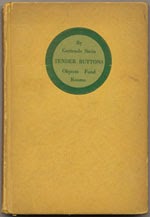 And he’s right. Younger poets find it stimulating: they are reclaiming this 'found' poetry and uploading it to the self-publishing platform Lulu. They create print-on-demand books that, most likely, will never be printed, but will live as PDFs on Lulu—their de-facto publisher and distributor. These are big, ridiculous books, like Chris Alexander’s five-hundred-and-twenty-eight-page McNugget, which reprints every tweet ever posted that contains the word 'McNugget'; Andy Sterling’s Supergroup, which appropriates over four hundred pages’ worth of Discogs listings of small-bit session players from long-forgotten nineteen-seventies LPs; and Angela Genusa’s Tender Buttons, which converts Gertrude Stein’s difficult modernist text of the same name into illegible computer code."
— Kenneth Goldsmith, The New Yorker
Read more…
Posted by Elora Writers Festival at 5:26 PM