I sing the body electric 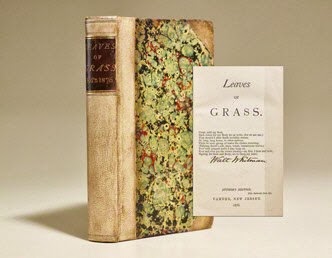 "The quintessential American poet Walt Whitman produced eight different versions of his magnum opus Leaves of Grass. Each was a labor of love, not only in terms of the additions to the text, but in the physical details of each edition. If I were a collector, I would love to collect each edition in the development of Whitman’s career. Each edition has its own aesthetic and its own story. But I would especially like to find the 1881 Suppressed Issue."
— Rebecca Romney, Aldine by Rebecca Romney
Read more…

"No one had previously looked specifically at the differing responses in the brain to poetry and prose. In research published in the Journal of Consciousness Studies, the team found activity in a 'reading network' of brain areas which was activated in response to any written material. But they also found that more emotionally charged writing aroused several of the regions in the brain which respond to music. These areas, predominantly on the right side of the brain, had previously been shown as to give rise to the 'shivers down the spine' caused by an emotional reaction to music.
When volunteers read one of their favourite passages of poetry, the team found that areas of the brain associated with memory were stimulated more strongly than ‘reading areas,’ indicating that reading a favourite passage is a kind of recollection.
In a specific comparison between poetry and prose, the team found evidence that poetry activates brain areas, such as the posterior cingulate cortex and medial temporal lobes, which have been linked to introspection."
— University of Exeter Medical School
Read more...
Posted by Elora Writers Festival at 4:06 PM