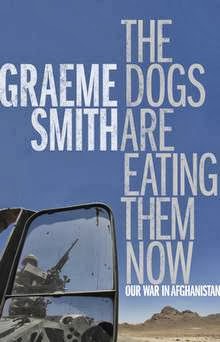 "Former Globe and Mail foreign correspondent Graeme Smith has won the third annual Hilary Weston Writers’ Trust Prize for excellence in non-fiction, at $60,000 Canada’s richest annual award for non-fiction. Mr. Smith, 34, received the prize on Monday evening at a ceremony in Toronto for his recently published memoir The Dogs Are Eating Them Now: Our War in Afghanistan.
Mr. Smith’s book prevailed over those of four other finalists. In its citation, the five-member jury described The Dogs Are Eating Them Now as a 'painfully detailed, eyebrow-raising account of what [Mr. Smith] saw during his [2006-2009 stint] reporting for The Globe and Mail on [the West’s] effort' to bring what he calls 'the whole basket of civilization to Afghanistan: peace, democracy, the rule of law.' For the jurors, Mr. Smith’s text – which begins with the sentence, 'We lost the war in southern Afghanistan and it broke my heart' – presents 'a tragic mix of cultural ignorance, miscommunication, greed, brutality and naiveté that no amount of individual courage and dedication could ultimately overcome.'
In a brief interview after receiving the award, Mr. Smith dedicated the prize to 'a few brave young men who decided to become translators instead of joining the gold rush of opportunists after 2001. I can’t use their names in public because it’s dangerous for them, but I’m going to bring this back to them.'”
— James Adams, The Globe and Mail
Read more…

"During the height of Canada’s combat deployment in southern Afghanistan, the young correspondent Graeme Smith stood out in the press corps because of his seniority in the city of Kandahar. Many journalists dropped in briefly, grabbed a story or two, and flew back to the safety of Kabul or the five-star luxuries of Dubai. But Smith kept coming back. He lived for long periods outside the safety of military bases to report for this newspaper from 2006 to 2009.
His book on Canada’s war in Afghanistan, The Dogs Are Eating Them Now, is a chronicle of disillusionment. The war, he writes, 'broke my heart': like many Canadians, he saw our mission there as fundamentally humanitarian and gave it a reasonably good shot at success. But his repeated encounters with reality quickly disabused him."
— Graeme Wood, The Globe and Mail
Read more…

Buy this book here...
Posted by Elora Writers Festival at 10:59 AM