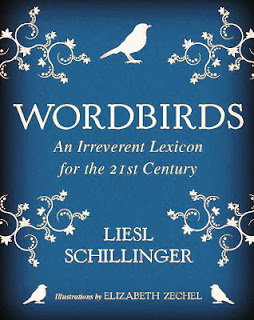 "There ought to be a word for 'the limbo-like precincts of an airport baggage claim, where groggy travellers gather around the motionless treads of empty conveyor belts.' It is a singularly desolate scene, and there should be a succinct way for a forlorn luggage-seeker to text a quick apology to the friend who is idly circling the airport roads. Now, there is: 'baggatory.'

That clever turn is just one of a couple hundred neologisms coined by Liesl Schillinger in her new book, Wordbirds: An Irreverent Lexicon for the 21st Century. […]
The word 'neologism' dates to the seventeen-seventies, taken from Greek via French, meaning 'new speech.' But the practice of coining new words goes back to the beginning of language itself. It accelerated as culture accelerated, and by the nineteenth century conservative types were worried that industry and science were flooding the linguistic marketplace with all kinds of shoddy fad words, and that the language had to be protected from interlopers. Others embraced the dynamism. In a letter to John Adams, in 1820, Thomas Jefferson, a man of business and science as well as politics, wrote, 'I am a friend to neology. It is the only way to give to a language copiousness and euphony.'”
— Ian Crouch, The New Yorker
Read more…
Posted by Elora Writers Festival at 9:23 AM