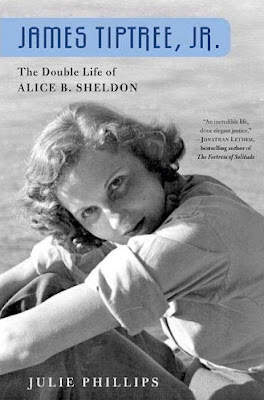 "Julie Phillips's James Tiptree, Jr.: The Double Life of Alice B. Sheldon tackles the monumental task of capturing in a biography the life of a woman who was a child on African safaris, a children's book illustrator as a child herself, a wealthy socialite, a painter, a WAC and aerial reconnaissance expert in World War II, a chicken rancher, a CIA analyst, a doctoral student in psychology, and a science fiction author.
More importantly, it attempts to show her roles as daughter, husband, and often mysterious friend, as brilliant creative mind plagued with depression, and as a feminist from an era and upbringing where feminism felt different and lived differently than it would for those growing up far later in the 1970s. In all of those tasks, this book succeeds brilliantly.
Phillips has not simply added background details to Tiptree the author or recorded the dry facts of a life (however complex). With painstaking research, frequent quotes from Sheldon's letters (as Tiptree and not), and respectful but thorough attention to motives and emotions, she has recorded the story of a person in all of her flaws, triumphs, and bright-edged tragedy."
— eyrie
Read more… 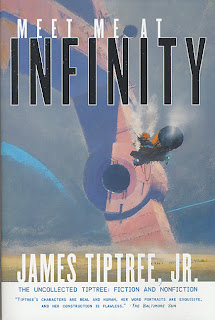 "We can go to science fiction for its sense of wonder, its power to take us to far-off places and future times. We can go to political fiction to understand injustice in our own time, to see what should change. We may go to poetry — epic or lyric, old or new — for what cannot change, for a sense of human limits, as well as for the music in its words.
And if we want all those things at once — a sense of escape, a sense of injustice, a sense of mortality and an ear for language — we can read the stories of James Tiptree Jr., real name Alice Sheldon.
The daughter of a famous travel writer, Sheldon grew up privileged, eloped and regretted it, then joined the Women's Army Auxiliary Corps; after World War II she married a career intelligence officer and earned a Ph.D. in psychology. In 1967, at 51, she began sending science fiction to magazines, taking her pseudonym from a marmalade."
— Stephen Burt, NPR
Read more…

Buy the biography, and all of James Tiptree Jr.'s books here...
Posted by Elora Writers Festival at 7:52 AM