Under the Collar of Climate Change 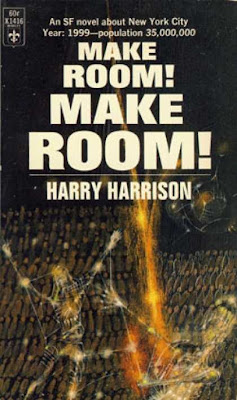 “'How can anything survive in a climate like this? A heat wave all year long. A greenhouse effect. Everything is burning up.'
Edward G. Robinson utters the complaint in the opening scene of 'Soylent Green,' [based on Harry Harrison's 1966 novel Make Room! Make Room!] just before his character, Sol Roth, leaves the tenement he shares with Charlton Heston to pick up his ration of soylent crackers. As he waits in line, food riots erupt. They look a lot like the food riots that exploded around the world the week Heston died in 2008.
Five years later, it wasn’t food riots but a grid-straining heat wave that sent me back to 'Soylent Green’s' dystopic New York of 2022. You could hear variations of Roth’s curse on stoops and streets around the city. They were sharpest in the mouths of the old and poor, whom the city encouraged to visit 'cooling centers.' In the paranoid frame of mind that follows a sweat-drenched screening [of] 'Soylent Green,' the words 'cooling center' evoke that movie’s air-conditioned state-run suicide centers. It is to one of these that Sol Roth checks in after learning the secret of the titular food. What he doesn’t know is that the facility provides the 'Peo-ple!' of Charlton Heston’s iconic closing cry."
— Alexander Zaitchik, Salon
Read more…

"…Whether it’s a drought in India, a heat wave in the U.S. or an extreme change in rainfall in Africa, Asia or South America, the outcomes tend to be the same: more wars, more murder, more riots and more domestic violence.
The intimate connection between climate and human interaction has long been documented, and could have contributed to the downfall of Chinese and Mayan empires, say the study’s authors. Reporting in the journal Science, lead author Solomon Hsiang, assistant professor of public policy at the University of California in Berkeley. and his colleagues analyzed 60 studies of climate change and human conflict at several levels, from domestic violence to the collapse of entire civilizations. 'All around the world across different societies in the modern world as well as throughout history, we find that human conflict seems to be linked to changes in climate,' says Hsiang."
— Mala Szalavitz, Time (Health & Family)
Read more…

Buy this book here...
Posted by Elora Writers Festival at 11:04 AM