Lean in; lawyer up 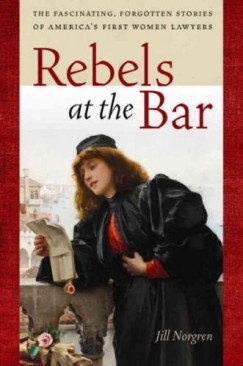 "Rebels at the Bar describes the struggles of a handful of women who sought to break the gender barrier for women becoming lawyers in the 19th century. Who were these women and what prompted them to fight the good fight? How did they manage to 'lean in' when there were no harnesses to hold them? [Jill] Norgren tells the story of how they clawed their way into the legal profession — they did not have it easy. While today’s women lawyers still struggle for equality, there is no doubt that our path was made possible by the sacrifices of these pioneers. They started the journey for us. The least we can do is pay attention to the lessons they learned….
The push for women lawyers began in the 1840s and 1850s when there was general interest in reform causes such as education, fair wages, and even the right to vote. Yet, the Civil War put these causes on hold as men once again decided the fate of the nation. Certainly, women played a role, but it was limited. In fact, the Civil War pushed women’s issues to the backburner as reformers focused on providing rights to blacks after the war.
Like many movements, sometimes it only takes one person to crack a door that thousands will later march through. That woman was Belva Bennett Lockwood."
— Laurie L. Levenson, Los Angeles Review of Books
Read more…
Posted by Elora Writers Festival at 11:38 AM