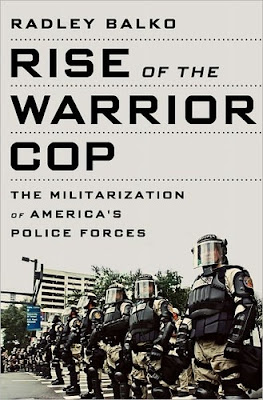 "If your image of American policing is Mayberry’s Sheriff Andy Taylor, who used homespun wisdom and a deep knowledge of his community to solve their problems and keep big city crime at bay, you won’t recognize the picture Radley Balko paints of modern law enforcement in his excellent new book, Rise of the Warrior Cop: The Militarization of America’s Police Forces.
Most here at FDL are likely familiar with Balko’s work (as a policy analyst with the Cato Institute, on his blog, 'The Agitator,' and as a journalist with Reason Magazine and now Huffington Post) because his superlative coverage of the drug war and police violence hits that sweet spot where libertarians, fiscal conservatives, progressives and civil libertarians all meet in shared indignation….


Balko focuses on the development of highly militarized SWAT teams, combined with the weakening of Fourth Amendment protections by courts, Congress, and presidents from either parties to illustrate this shift over time. And this is where his storytelling skills shine, recounting one heartbreaking story after another.
Examples include Heyward Dyer, a 22-year-old husband and father living with his family in Whittier, California. A police officer’s .223 caliber assault rifle accidentally discharged during a drug raid, sending a high velocity round through the floor and into the apartment below, where it hit Dyer in the head as he held his infant child, who was awoken by the commotion above. Or a more notorious case involving an NYPD raid in Harlem based on an informant’s tip that a felon was dealing weapons and drugs out of the building. The NYPD threw a flash-bang grenade to initiate the raid, stunning the building’s only resident, 57-year-old city employee and 'devout churchgoer' Alberta Spruill. Spruill went into cardiac arrest and died, one of several fatalities from stun grenades, confounding their description as non-lethal weapons."
— Mike German, FDL Book Salon
Read more…

Buy this book here...
Posted by Elora Writers Festival at 7:10 AM