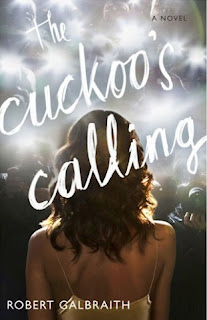 "In the wake of JK Rowling’s lawyer blabbing to friends and sundry that she wrote The Cuckoo’s Calling under the pseudonym Robert Galbraith, there appears to be a bit of an obsession on the internet (mostly by other authors) over why The Cuckoo’s Calling wasn’t more successful prior to the announcement.
Although the detective novel received across-the-board praise from the critics, including a starred review in Publisher’s Weekly, only about 1500 copies were sold between its release and the reveal that it was penned by everyone’s favourite wizarding author (some estimates are much lower, around 500). This has been used as an example to show how difficult it is to be successful as an author, that mystery readers are the most unadventurous readers on the planet, and that people are only attracted to books with explosions."
— Tasha Brandstatter, BOOKRIOT
Read more…
Posted by Elora Writers Festival at 5:42 PM