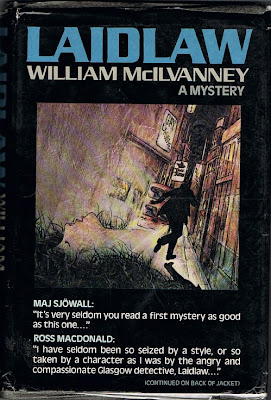 "[William] McIlvanney has been called the Godfather of Tartan Noir and lists bestselling crime writers like Ian Rankin and Val McDermid among his fans.
'I find it very flattering,' said McIlvanney. 'I went to the Bloody Scotland [crime writing] festival last year and I was amazed by how many people were so benign towards me. I mean, to be called the Godfather of Tartan Noir - which is not my favourite term - is hugely flattering.'
His re-released novel, Laidlaw, is broadly considered to be the first work of Tartan Noir and kicked off a phenomenon that has collected international acclaim for its portrayals of the dark side of Scottish life.
'Anything that keeps the book alive, I think, is good,' said McIlvanney.
'I don’t think that it’ll be the ultimate expression of Scottish culture, folk will come along and do more but I think it’s great that there’s an area where the value, the significance of the written word, is appreciated.'
Set in Glasgow, McIlvanney, says the novel reflects the No Mean City tag but doesn't exaggerate it.
'I think Glasgow has a reputation which is not unearned but which is exaggerated,' he said.
'Besides being a hard town it’s a terrifically warm town, I think, it’s a place, as I once said, where Greta Garbo wouldn’t have been alone - she’d have been in a pub somewhere and somebody would shout out, 'Hey you in the funny hat, come over and have a blue lagoon!’"
— Tony Black's Pulp Pusher
Read more…