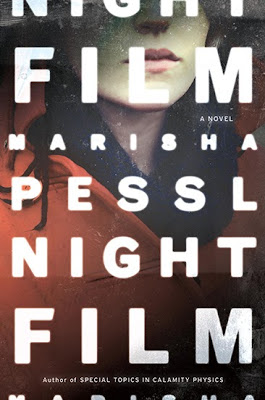 "Marisha Pessl’s new literary thriller – arriving seven years after her splashy debut novel, Special Topics in Calamity Physics – captures something true about the viral, jumpy, surface-skittering way we live now. In an age of the infinitely reproducible, Pessl strives for innovation through remix rather than originality. Clichés and too-familiar tropes are prized playthings for her, and the more the merrier. Nothing is new in Night Film except for the abandon with which the author piles on references to movies and magazines and websites and other books; yet by mimicking the frantic hypertexture of contemporary life, the novel keeps reminding us just how much has changed. […]
A brash stylistic maneuver energizes the novel’s opening pages, in which Pessl presents facts about Ashley’s life and death through a series of website simulations, newspaper and magazine clippings, and other realistic-looking documents. In a faux NewYorkTimes.com article, Ashley (or, more accurately, an uncredited stand-in for her) stares challengingly in an accompanying photo, looking a bit like a sulkier young Amanda Peet, while a Time.com slideshow clicks through the particulars of Stanislas Cordova’s life, including his three ex-wives and the 300-acre Adirondacks estate that has been his home since 1976 and has served as the location for most of his films. "
— Donna Rifkind, The Christian Science Monitor
Read more…
Posted by Elora Writers Festival at 2:06 PM