"... tangy reduction enlivened with a sprinkle of cinnamon and saffron." 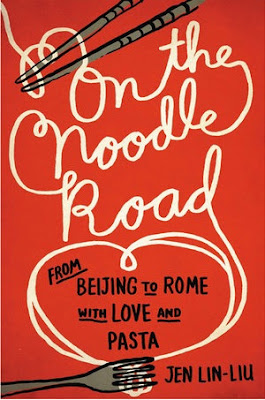 "You may have heard that Italy was introduced to pasta by Marco Polo, who brought it from China. It's a great story, but it was probably cooked up by a 1920s Don Draper — it's just not true. Italians were eating pasta before Polo was born. How, then, did two nations half a world apart, with radically disparate cuisines, wind up making noodles that are strikingly similar? That's what food writer Jen Lin-Liu sets out to discover in On the Noodle Road, traveling overland from Beijing to Rome.
Lin-Liu, a first-generation Chinese American, was raised in suburban Southern California; she went to Columbia University and afterward moved to China to explore its food and culture. She wrote about the country's rapid changes alongside her own story of attending cooking school and becoming a chef in her first book, Serve the People. This book, too, mixes personal narrative with a journalist's take on the world around her.
Lin-Liu traveled the Silk Road, selecting her path from the trade routes along which recipes and ideas might have migrated. She took about six months, giving herself time to eat lots, explore kitchens and learn to make noodle dishes along the way."
— Carolyn Kellogg, Los Angeles Times
Read more…
Posted by Elora Writers Festival at 12:15 PM