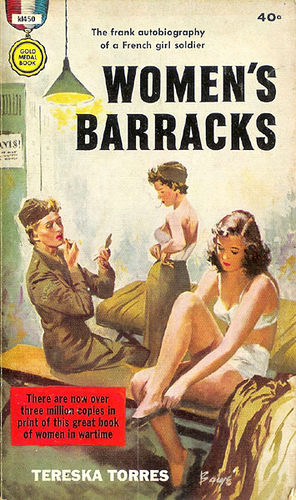 "In 1950, twelve years after Pocket Books published the first mass-market paperback, Fawcett began to feature the twilight world of women-loving women with its successful Gold Medal imprint series.
Other publishers followed suit; soon the genre was so firmly established that readers could choose among several formulas or subgenres of lesbian pulp fiction: lesbians in institutions, love triangles, lesbians 'saved' by straight men, etc. With their camp cover art and lurid prose, many of these books appealed to readers across lines of gender and sexuality, desires and tastes; although the narratives undoubtedly satisfied the prurient interests of many straight readers, they also catered to an entire generation of lesbian readers, who were anxious to find a reflection-albeit distorted and often cruel-of their own lives in a work of fiction.
Lesbian pulps were titled and pictured in 'codes' that helped lesbians pick them out from amongst a drugstore rack filled with similar, often lurid, titles: a cover with a brunette towering over a reclining blonde, often with a man in the far background; titles with 'strange', 'odd' or 'shadows' in them.
The pulps gave some women a glimpse into a world that wasn't easy to access outside of large cities. The popularity of the pulps made them available to women across the country, providing some sense of comfort and inclusion.
However, lesbian characters rarely fared well in these novels, their potential for happiness ruined by censure typical of the period: a woman engaged in illicit pleasures of one kind or another had to suffer a downfall to balance out the licentiousness of her actions. This 'moral lesson' redeemed lesbian pulps from the ranks of mere pornography under the pretense of providing a public service."
— The Sallie Bingham Center for Women's History and Culture, Duke University Libraries
Read more…
Posted by Elora Writers Festival at 11:39 AM