Why is the word for the person who makes our shirts spelled the same as where our shit goes? 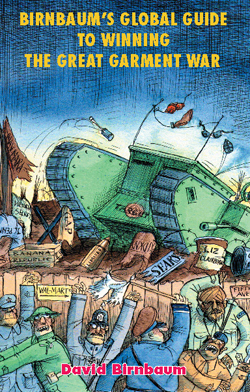 "Case Study I —The Sri Lankan Sewer An A-class sewer in Sri Lanka is paid $2.00 per day. An assembly line will produce about 18 shirts per day per machine, incurring a sewing cost of $0.11 per unit. The other operations, such as cutting, buttonholemaking and pressing, add a further $0.06. Total direct labor cost will therefore be less than $0.20 per shirt. Unless the importer requires Tiffany cufflinks for buttons, the total trim including packing materials will probably be under $0.25. Total of labor and trim should, therefore, be $0.45.
However, the average manufacturing or cut-make-trim (CMT) charge for a shirt in Sri Lanka is $2.10 or over four times the labor and trim cost, and about ten times the direct-labor cost. [...]
Most garment professionals can work out that in the case of the Sri Lankan factory, direct labor counts for only 10% of CMT. These same professionals know that as in the case of the five-pocket jeans, total CMT in a Third World factory seldom exceeds 30% of the FOB [Free On Board] price. That means the total cost of direct labor in these factories is a negligible 3% to 4% of FOB, which in turn works out to 2% of the LDP price or about 0.75% of the retail price.
Yet despite these ratios, I and almost every other garment professional around still looks at direct labor as the prime factor in determining total garment cost.
Take, for example, a senior executive for one of the world’s largest manufacturers of active sportswear and footwear in April 1997 commenting on a 10.7% pay rise recently won by their Indonesian factory workers, who stated, 'Indonesia could be reaching a point where it is pricing itself out of the market.'”
— David Birnbaum's Blog
Read more...

“In the wake of another deadly disaster at a major hub of garment manufacturing in Bangladesh -- this time, the collapse of a building that took the lives of more than 300 people -- the multinational brands that use the country to make their products once again find themselves having to explain what went wrong. […]
After another horrific spectacle in a poor country that produces the garments worn by those with consumer power in far-wealthier lands, major brands are trying to limit their exposure to the tragedy. But amid the familiar public accounting, labor advocates assert that few can ever know, with absolute certainty, where their products are made and how factory workers are treated within those plants.[…]
[But] Somehow, brands are able to control the quality of the products manufactured in their factories, and yet, they aren’t able to monitor the workers. If apparel retailers don’t know where the materials for their products are being sourced from, he said, it’s because they chose not to care."
— Kim Bhasin, Huffington Post
Read more...