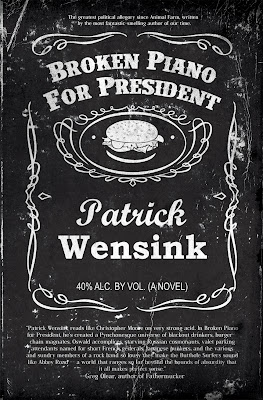 "This past summer, my novel, Broken Piano for President, shot to the top of the best-seller lists for a week. After Jack Daniel’s sent me a ridiculously polite cease and desist letter, the story went viral and was featured in places like Forbes, Time magazine and NPR’s Weekend Edition. The New Yorker wrote one whole, entire, punctuated-and-everything sentence about me!
My book was the No. 6 bestselling title in America for a while, right behind all the different 50 Shades of Grey and Gone Girl. It was selling more copies than Hunger Games and Bossypants. So, I can sort of see why people thought I was going to start wearing monogrammed silk pajamas and smoking a pipe.
But the truth is, there’s a reason most well-known writers still teach English. There’s a reason most authors drive dented cars. There’s a reason most writers have bad teeth. It’s not because we’ve chosen a life of poverty. It’s that poverty has chosen our profession.
Even when there’s money in writing, there’s not much money."
— Patrick Wensink, Salon
Read more…