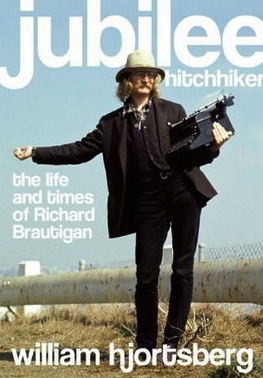 "Richard Brautigan hitchhiked to San Francisco in 1956, intending to pursue poetry, but, out of step with the Beat movement – Allen Ginsberg called him 'a neurotic creep' – he struggled to make a mark. Switching from verse to prose, he claimed 'I don’t want to sit at the children’s table any more,' but it was with the Flower Children of the hippy movement that he found success. When they lost interest, he struggled again, this time against drink and adverse criticism, living 'in a macho milieu of hard drinkers, gunslingers and philanderers' and eventually shooting himself with one of his beloved Smith & Wessons."
— Alan Jenkins, The Times Literary Supplement
Read more… 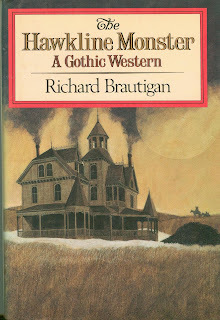 "Jubilee Hitchhiker, the long-awaited biography of novelist Richard Brautigan, is an astonishing book on multiple levels.
Most obvious is its size: Nearly 900 large-format pages of small type, including photographs, an index and a bibliography. The proper description of this ambitious project requires italics and an exponent: Comprehensive.
The blessing is that the biographer, William Hjortsberg, is a talented novelist and screenwriter. He knows how to tell a story and can create brilliant atmospherics while doing so.
On September 16, 1984, the musky smell of congealing blood lingered in the enclosed air, not the sweetness of dried flowers. The loud radio echoing from the kitchen drowned an insistent buzz of gathering flies.

The opening chapter, describing Brautigan's suicide and subsequent decomposition, is chilling and masterful. Like a Greek tragedy, we are shown the horrific end at the beginning, and are inexorably drawn into the story:
Brautigan's body would remain undiscovered for more than a month. "
— Joseph Bednarik, Oregon Live
Read more...