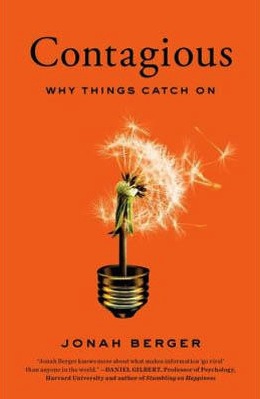 "Mass media made fads part of the zeitgeist of any particular moment, but virality aspires to map the zeitgeist — trace the routes by which ideas spread and count influence in hard numbers. Fads used to have to measure themselves by proxy in sales figures for some particular commodity; now messages themselves are the whole of the commodity, and if there is anything material associated with a viral phenomenon, it is an afterthought, an optional souvenir.
Virality becomes self-referential, tautologous, the content of a viral meme is the fact of the meme’s virality, and this autophagy becomes its essence, its motive force. It feedbacks on itself, but no one seems to hear the screech over their own shouting.
But I wanted to hear the opposing case, that there is something other than de facto virality that drives viruses, so I decided to read Contagious, a recent book by Wharton marketing professor Jonah Berger that is intended as a kind of sequel to Malcolm Gladwell’s The Tipping Point. Gladwell’s book introduced readers to elite influencers, Berger explains, but didn’t do much to explain what could make content itself viral, able to circulate itself efficiently despite the at times dubious quality of the human hosts transmitting it. 'Contagious content is … so inherently viral that it spreads regardless of who is doing the talking. Regardless of whether the messengers are really persuasive or not and regardless of whether they have ten friends or ten thousand.' No cults of personality for Berger. No personality at all is required in this world. (Isn’t it wonderfully democratic?)"
— Rob Horning, The New Inquiry
Read more…