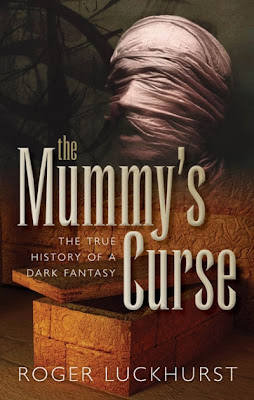 "Unlike other plundered cultures, the riches of Egypt contained something none other did: the bodies of kings and princes, queens and princesses, their children, and even their pets, preserved for millennia with the belief that they would ride the god Ra’s boat into the afterlife. The mummy was first seen as a wonder, then a pop-medical curiosity, and by the late nineteenth century the locus of any number of curse rumors, occult speculations, and supernatural fiction plots. Roger Luckhurst’s new book The Mummy’s Curse attempts a kind of cultural and literary archeology of this phenomenon of how the mummy went from curiosity to dread in less than a century. In the course of his investigation, Luckhurst attempts to show that the story of the mummy’s curse is born of a fusion of empire building, xenophobia, and belief in the inheritance of sin. Luckhurst also makes the significant observation that England’s fascination with the mummy and its supposed otherworldly power is also an important example of the persistence of the occult imagination, even in a scientific age.
[…] In an attempt to unravel the belief in the mummy’s supposed hidden supernatural powers, Luckhurst’s book maps out not the actual country of Egypt as it existed during the eighteenth and nineteenth centuries, but rather the Egypt that existed as a simulacrum within British culture. The education of the British public proceeded via displays and dioramas made up of both real and fabricated artifacts, many of which included actual mummies.
Mummy unwrappings became staged events, often by leading surgeons who infused spectacle with science. No matter how violently the surgeon would have to rip and tear and cut at the mummy, the fact that an actual dead body was contained within didn’t elicit the slightest superstitious wince."
— Peter Bebergal, Los Angeles Review of Books
Read more…

Get this book here…
Posted by Elora Writers Festival at 1:41 PM