"[...] A few weeks later, [Len] Deighton stood outside his Georgian terrace home and watched as workers removed a window so that a 200-pound unit could be hoisted inside with a crane. The machine was IBM’s MTST (Magnetic Tape Selectric Typewriter), sold in the European market as the MT72. 'Standing in the leafy square in which I lived, watching all this activity, I had a moment of doubt,' the author, now 84, told me in a recent email. 'I was beginning to think that I had chosen a rather unusual way to write books.'
Today, of course, many—surely most—fiction writers work with computers, laptops, and word processors just like the rest of us. Literary scholarship generally credits Mark Twain’s Life on the Mississippi with being the first manuscript submitted to a publisher in typewritten form. Would it be possible, I wondered when I began my research into the literary history of word processing a year and a half ago, to locate a corresponding first for the digital age? The answer turns out to be the book Deighton published in 1970 with the aid of the MTST: a curiously apropos novel about World War II, titled Bomber. […] 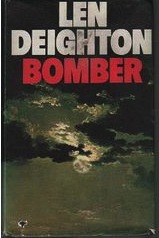 Deighton’s biographer and longtime friend, Edward Milward-Oliver, points out that this early adoption of word processing was consistent with Deighton’s long-standing interest in technology. And he remained a computer pioneer. Mortally afraid of losing text to power outages, Deighton had one of the first uninterrupted power supplies custom-made for the Olivetti word processor he moved on to next. (Today he favours Windows laptops.)"
— Matthew Kirschenbaum, Slate
Read more…