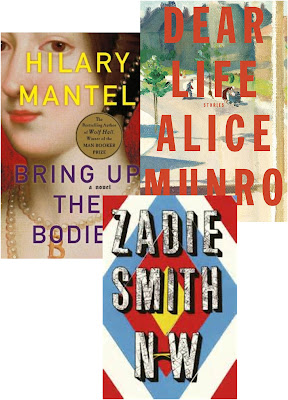 "On Monday afternoon, the Pulitzer Prize Board will announce the winner of the 2013 Pulitzer Prize for fiction. Or not.
Last year, for the first time in 35 years, there was no prize awarded for fiction. Imagine Bono walking on stage to award the Grammy for Album of the Year and announcing that there wouldn't be an award for Album of the Year. It was like that. The snub earned the Pulitzer Prizes more publicity — and not the good kind — than the actual awards, and I can't imagine them laying an egg again this year. […]
First, let's knock out three of the most praised books of the year on technicalities. The Pulitzer for fiction is limited to American authors (how rude!), so Alice Munro's much-loved short story collection Dear Life (Knopf) is out because Munro is — wait for it — Canadian.
Also out: UK's Hilary Mantel, who wrote the Booker Prize-winning Anne Boleyn novel, Bring Up the Bodies (Henry Holt), and Zadie Smith, who wrote the London-set NBCC finalist NW (Penguin)."
— Scott Porch, Huffington Post
Read more…

Buy the books by Hilary Mantel, Alice Munro and Zadie Smith; and the works of all the Pulitzer prize contenders here...
Posted by Elora Writers Festival at 10:23 AM