“Invention, it must be humbly admitted, does not consist in creating out of void but out of chaos.” ― Mary Shelley 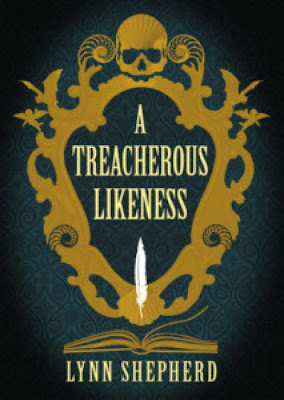 "It is the autumn of 1850 and a westerly wind is blowing through London, setting the scene for Lynn Shepherd's new literary whodunit. Shepherd has previously published elegant mysteries inspired by Bleak House and Mansfield Park, but A Treacherous Likeness takes her into more ethically dangerous territory: she founds her novel on a series of real-life tragedies. Her focus here is on the story of Percy and Mary Shelley and Mary's step-sister Claire Clairmont, and on the battle the Shelleys' descendants fought to preserve their reputations. […]
A Treacherous Likeness opens with Jane Shelley summoning detective Charles Maddox to the house on Chester Street from where she controls access to Shelley's archive with an iron grasp. Charles's brief is to establish what papers Claire Clairmont has in her possession and to help the Shelleys retrieve them. Being a bright young man, Charles deduces that Jane and her hen-pecked husband Sir Percy in fact want more from him than this. Over the course of much sleuthing he discovers that his own great-uncle became entangled with the Shelleys in 1814, and that in the papers of his family lies a secret which threatens to destroy the legacy of the poet and his wife."
—Daisy Hay, The Guardian
Read more…

Buy this book here...
Posted by Elora Writers Festival at 6:43 AM