End of a Paper Trail 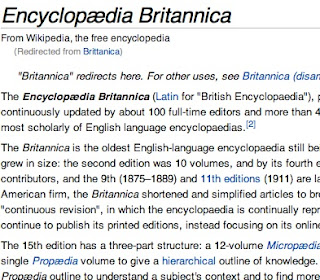 "No civilised person is supposed to make bonfires of books. ‘Wherever they burn books they will also, in the end, burn human beings,’ wrote the German poet Heinrich Heine in the century before Nazism. Burning books is a sacrilegious act, and the taboo against it particularly binds writers. So what was I doing in a Somerset field lighting a match under the 32 volumes of the Encyclopædia Britannica?
In my defence, this was more of a cremation than a burning at the stake. The books were already dead, terminally rotted after years of neglect. If I had committed a crime, it was to let them get into this sorry state, not finally to put them out of their misery."
— Julian Baggini, Aeon
Read more...

"This is the end of another institution that started with the Industrial Age: news spread a few days ago [March, 2012] that the Encyclopedia Britannica stopped its printed edition, having sold only a few thousand copies per year in the last years. It will continue to make its database available online.
Let’s do some fun maths. In 244 years of existence, around 7 million copies of the precious encyclopedia were sold (or, on average 30,000 per year). During that time approximately 17 billion people have been born and became adults (see for example this article of Carl Haub, the specialist in historical demography). Thus on average, there was one copy of the encyclopedia available for 2,500 people."
— Jeremie Averous, The Fourth Revolution Blog
Read more…

"In the 1950s, having the Encyclopaedia Britannica on the bookshelf was akin to a station wagon in the garage or a black-and-white Zenith in the den, a possession coveted for its usefulness and as a goalpost for an aspirational middle class. Buying a set was often a financial stretch, and many families had to pay for it in monthly instalments."
— Julia Bosman, The New York Times
Read more…
Posted by Elora Writers Festival at 3:30 PM