" […] eat whatever you want, as long as you’ve cooked it yourself." 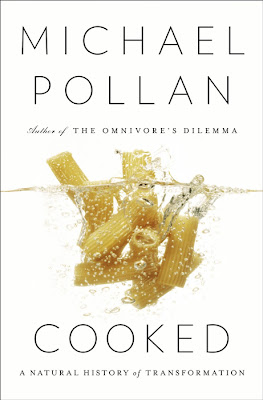 "Michael Pollan’s seventh book will not substantially surprise readers of the first six. Mr. Pollan has often said that we lose touch with the basic facts of food production at our own peril, and that shared meals hold families and communities together. He has advocated fresh ingredients and sounded warning bells about why processed foods are barely worth digesting. And he is a major ingredient in his books’ blend of gastronomy, science and investigation, linking his own experiences to the lessons he imparts.
But Mr. Pollan winds up broadly playing celebrity chef in Cooked, his four-quadrant book about fire (barbecue), water (stewing and braising), air (baking bread) and earth (fermentation). He was prompted to do this, he says, partly by what he calls the Cooking Paradox. There we sit on our sofas, watching cooking shows on television rather than preparing meals of our own. 'I don’t need to point out that the food you watch being cooked on television is not food you get to eat,' Mr. Pollan says."
— Janet Maslin, The New York Times
Read more…

Find out more about the health benefits of gardening and cooking at the Elora Writers' Festival on Sunday, May 26; where you can hear Sonia Day read from her award-winning books Incredible Edibles and The Untamed Garden.

Get more information about Sonia Day and the Festival here...

And buy all of Michael Pollan's easily digestible books here...
Posted by Elora Writers Festival at 10:28 AM