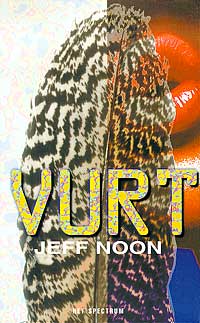 "'A young boy puts a feather into his mouth ... ' So, in 1993, began Jeff Noon's first novel, Vurt. It was something the like of which had never been seen before, and it established Noon – then a struggling 35-year-old playwright earning rent by working in the Deansgate branch of Waterstones and writing at night – as a figure of major promise in British science fiction.
Twenty years on, Vurt is being republished in an anniversary edition with three new stories, but the Noon who wrote it is, if not a forgotten figure, then one who never quite achieved the recognition that seemed his inevitable due. […]
Noon says he is more interested in 'subject matter and atmosphere than character and plot' – yet an exuberantly propulsive story ran through it. 'There are two drives I have,' he says. 'One is towards experimentation. The other is towards campfire storytelling.' […] 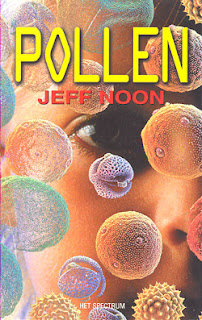 Noon started to 'remix' sections of his own work. The first time he actually saw music software, he says, 'I was astonished. I was jealous. He could take a piece of music and turn it upside down, stretch it, slow it down, remix it ... everything, with all these amazing buttons. And I thought: "why can't I do that?" I was looking at different aspects of electronic culture and how that can affect prose. So what you call experimentation was to me a natural process of following that and trying to manipulate language in the same way that a musician manipulates music.'"
— Sam Leith, The Guardian
Read more…