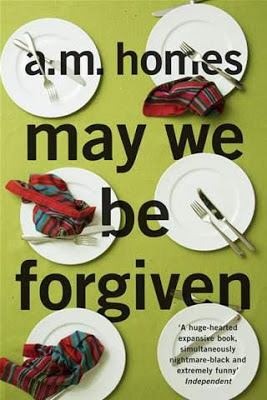 "An often breathtakingly dark and crazy satire on modern American life caused a literary upset on Wednesday night  [June 5, 2013] when [May We Be Forgiven by A.M. Homes] won the women's prize for fiction beating novels by Zadie Smith, Kate Atkinson and the bookies' favourite, Hilary Mantel.
AM Homes became the fifth American in a row to be named winner of the £30,000 prize, formerly known as the Orange, for her sixth novel, May We Be Forgiven. The actor Miranda Richardson, who chaired the judging panel, said the book went beyond the prize's criteria of originality, accessibility and excellence. 'It was so fresh and so funny – darkly funny – and so unexpectedly moving,' she said.'
— Mark Brown, The Guardian
Read more…

"The first section is a tour-de-force of pitch-black comedy.... The story begins at Thanksgiving: Harry Silver, an under-achieving Nixon scholar, describes his hatred for his taller, richer, more aggressive brother George, a TV network boss, who sits 'at the head of the big table, picking turkey out of his teeth, talking about himself.' George's children, aged 10 and 11, are 'sat like lumps at the table, hunched, or more like curled, as if poured into their chairs, truly spineless, eyes focused on their small screens, the only thing in motion their thumbs – one texting friends no one had ever seen and the other killing digitised terrorists.' Harry is picking the stuffing out of the 'heirloom' turkey carcass in the kitchen, his lips smeared with grease, when his sister-in-law Jane suddenly kisses him on the lips.
A few months later George is arrested. He has run a red light and smashed into a people carrier, killing a couple and leaving their son orphaned; it's not clear that it was an accident. Then, in startlingly quick succession, all sorts of bad things happen: an affair, a murder, a divorce; and Harry suddenly finds himself in sole charge of his niece and nephew. After the first exhilarating 50 pages, the reader wonders: where on earth can Homes go now?"
—Theo Tait, The Guardian
Read more…
Posted by Elora Writers Festival at 10:14 AM