Funny you should write that... 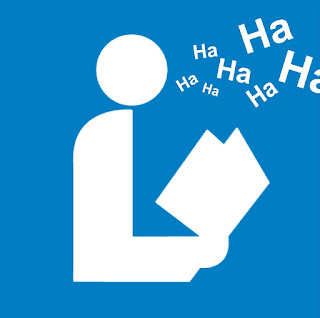 "The British sense of humour is famous around the world but what kind of literature makes them laugh? It seems the ideal amusing read for Brits would be a mind-boggling combination of P.G. Wodehouse's sublime wit, a liberal dose of Joseph Heller's black humour and a slice of Douglas Adams' galactic comedy.
Our UK website, AbeBooks.co.uk recently asked 555 of its customers to name the funniest book they had ever read. Right Ho, Jeeves, Catch-22 and The Hitchhiker's Guide to the Galaxy were the top three. Eight of the top 10 authors were British but Americans Heller and John Kennedy Toole also featured prominently."
— Richard Davies, Abe Books
Read more…

"What do the Stephen Leacock Memorial Medal for Humour judges find so funny about a couple of murderers?
For the past two years, the prestigious medal has been won by works of dark humour.
'People are saying "What’s so funny about The Sisters Brothers (by Patrick deWitt) when it’s about a couple of murderers?”' Mike Hill, president of the Stephen Leacock Association, said. 'It’s really dark material.'
The Sisters Brothers won the medal this year while Practical Jean, by Trevor Cole, won in 2011.
'It’s about a woman who goes around murdering her friends,' Hill said of Practical Jean. 'We’ve had two years in a row of very dark material winning.'
Prompted by the public’s reaction, the Stephen Leacock Association will be having a discussion on defining humour at its annual general meeting Sunday.
Joseph Kertes, dean of the school of creative and performing arts at Humber College in Toronto and a former Leacock Medal winner, will be leading the discussion.
'Humour is very subjective,' Hill said. 'I think it changes over the decades. The Leacock Medal has reflected that evolution.'"
— Sara Ross, Orillia Packet & Times
Read more…
Posted by Elora Writers Festival at 10:24 AM