A Jest of God by Margaret Laurence was made into the movie Rachel, Rachel (released 1968). It was  produced and directed by Paul Newman with his wife Joanne Woodward in the lead role. The screenplay was written by Stewart Stern who is best known for Rebel Without A Cause (1951). 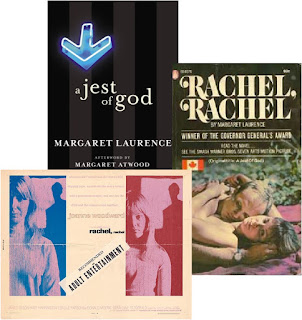 "Margaret Jean Laurence (nee Wemyss) was born in Neepawa, Manitoba in 1926. Her mother died when she was four years old. Her father remarried her aunt. He died when she was nine years old and at that point her aunt and stepmother raised her. Margaret married Jack Laurence on September 13, 1947 (they later divorced) and they had two children; Jocelyn and David. She was educated at the University of Manitoba in Winnipeg. Margaret lived in a number of different places including: Somaliland (1950-1952), Ghana (1952-1957), Vancouver (1957-1962), England (1949-1950 and 1962-1969) and finally Ontario until her death in 1987."
— Trent University Archives
Read more…

When she returned to Canada in 1973 she settled in Lakefield, Ontario, home of the Lakefield Literary Festival.
Find out more about this festival, which is held each July on the weekend closest to Margaret Laurence's birthday, here...

Buy all of Margaret Laurence's books here...
Posted by Elora Writers Festival at 7:54 AM