"DEBAUCHEE, n. One who has so earnestly pursued pleasure that he has had the misfortune to overtake it." — Ambrose Bierce, (The Devil's Dictionary) 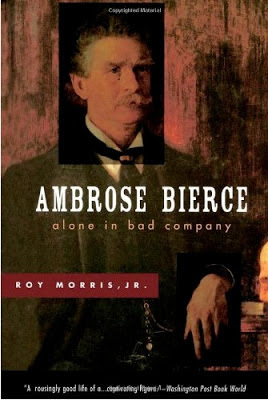 "In the San Francisco of 1876, Ambrose Bierce reigned as unchallenged literary king, the best known writer west of the Rockies. Some of the contemporaries who nourished their lights in Bierce's shadow are much better known today. Bret Harte, Jack London, and Joaquin Miller not only rate larger space in the textbooks, but their works remain easily available. Of Bierce's voluminous writings, only a collection of short stories, In the Midst of Life, and fragments of The Devil's Dictionary are easily obtainable. But if Bierce's literary endeavors have not stood the test of time as well as those of certain of his contemporaries, he still enjoys a last laugh, because the mystery of his strange disappearance is better known than the entire life histories of Harte, London, and Miller….
Some researchers have speculated that in the tales summarized above [The Spook House, The Difficulty of Crossing a Field, An Unfinished Race, and Charles Ashmore's Trail] Bierce was writing horror fiction, Edgar Allan Poe-style. However, none of the accounts were presented as short stories, but as journalistic reports.
In the collection that I obtained as a teenager [Tales of Haunted Houses], Bierce followed these accounts with a postscript entitled, 'Science to the Front.'
It seemed to Bierce that the theory of Dr. Hern of Leipzig, which was expounded in the scientist's own book, Verschwindend und Seine Theorie, might offer an explanation for the subject of mysterious disappearances, '… of which every memory is stored with abundant example.'
According to Bierce, the theories of Dr. Hern had attracted some attention 'particularly among the followers of Hegel, and mathematicians who hold to the actual existence of a so-called non·Euclidean space—that is to say, of space which has more dimensions than length, breadth, and thickness... space in which it would be possible to tie a knot in an endless cord and to turn a rubber ball inside out without a solution of its continuity, or, in other words, without breaking or cracking it.'"
— Brad Steiger, Rense
Read more…

Buy Roy Morris Jr.'s book about Ambrose Bierce, and all of Brad Steiger's books here...
Posted by Elora Writers Festival at 10:41 AM