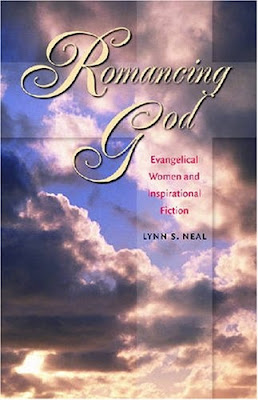 "In Romancing God, [Lynn] Neal describes how evangelical romance novels (or inspirational fiction) overlay the basic plot structures of secular romance novels with the theology of conservative Christianity. In addition to sanitized language and censored sex scenes that rely upon euphemism, these works differ from their secular counterparts by presenting obstacles somehow related to the characters' religious beliefs (or lack thereof) that separate the male and female protagonists. In turn, heroines and heroes overcome these problems not through fate or their own designs but rather through faith and the power of God's love. The focus of Neal's book, however, is not upon the explicit plots and implicit theology of inspirational fiction. Instead, through interviews with both authors and readers, she primarily analyzes why women (who are the main readers of these books) choose to read evangelical romance novels and how these works shape readers' religious imaginations and experiences."
— Brantley Gasaway, Religion in American History
Read more…

"Research in romance fiction also reveals information about women as both consumers and producers of consumer culture. [Lynn] Neal says that warnings against romance novels date as far back as 1566. In American culture, fiction, especially women's fiction, has long been seen as a corruptive and dangerous force.
In the 19th century, women were thought to be susceptible to the powers of fiction and were urged not to read it — but read it they did. 'Our culture's deeply entrenched stereotype of romance novels and their readers reflect a deep-seated anxiety about the relationship between women and sexuality and how women use their leisure time,' says Neal, the author of Romancing God: Evangelical Women and Inspirational Fiction."
— Kim McGrath, Wake Forest University (Window on Wake Forest)
Read more…
Posted by Elora Writers Festival at 8:35 AM