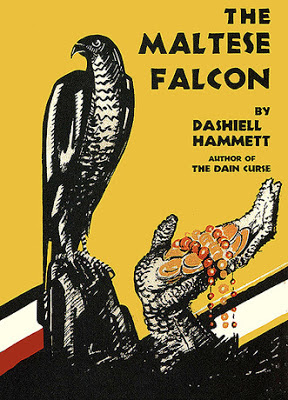 "A few years ago in Paris I happened to pick up, at one of the bookstalls along the Seine, a shabby volume in English. It was an old paperback collection of American crime stories. I barely remember the titles or the authors now. But I've never forgotten the atmosphere—gloomy, monotone, cynical, as emotionally austere as Formica. It made me intensely homesick....
It was an ideal introduction to a peculiarly American literary genre: the hard-boiled story. People think 'hard-boiled' automatically means a wisecracking private eye and an icy femme fatale (or, more often lately, a wisecracking private eye who is an icy femme fatale), but the genre used to be a lot more interesting. The Library of America has an excellent two-volume set called Crime Novels, which surveys the field in its glory years—roughly from its first sproutings in the pulp magazines of the late 1920s through its efflorescence in the cheap original paperbacks of the 1950s—and there isn't a private eye in sight. The 11 novels collected in the set are about small-time chicanery and shuffling criminality—a seedy panorama of con men, carnies, outlaws and losers. It's less like The Maltese Falcon than a WPA documentary on American hard times….
...What he couldn't duplicate was [Dashiell] Hammett's freakish knack for making neutrality interesting. Every object in a Hammett novel registers with unnerving clarity, even when it doesn't appear to signify anything at all—as in this aria to an office desk:

Ragged gray flakes of cigarette-ash dotted the yellow top of the desk and the green blotter and the papers that were there. A buff-curtained window, eight or ten inches open, let in from the court a current of air faintly scented with ammonia. The ashes on the desk twitched and crawled in the current.
It's as radiant as an Edward Hopper painting, and as eerie. It means nothing in particular, and yet it seems to hold within it the silence of the entire American landscape. Hammett's deadpan brutality inspired generations of truculent, thuggish, bullying private eyes; because of his influence, the average hard-boiled novel is like the world's surliest Internet comment thread. But his more enduring legacy is in the way he was able to infuse the flatness of the American vernacular with this strange visionary cool."
— Lee Sandlin, The Wall Street Journal
Read more…