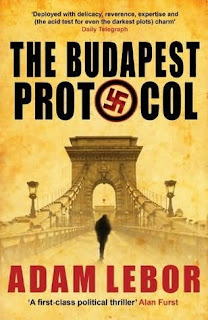 "…In theory, writing a thriller is simple. The basic formula reaches back through the ages, to the Odyssey and the Bible. Take a flawed but likable hero, send him on a perilous journey where he is forced to confront his inner demons, increase the danger at every stage, have an ally or two betray him, but ensure that he eventually vanquishes the enemy, emerging bruised, wiser and triumphant.
The practice, however, is rather more complicated….


Writing fiction, I soon realized, required not so much a steep learning curve of mastering plot and pacing, character and narrative drive, as a steep unlearning curve. And once the urge to explain has been conquered, other hazards await: overuse of research (male action writers are especially prone wherever guns are involved), overt signposting for readers assumed to be too dim to make the necessary connections (they are not) and didactic dialogue."
— Adam LeBor, The New York Times
Read more…

Buy The Budapest Protocol and all of John Le Carré's books here...
Posted by Elora Writers Festival at 1:06 PM