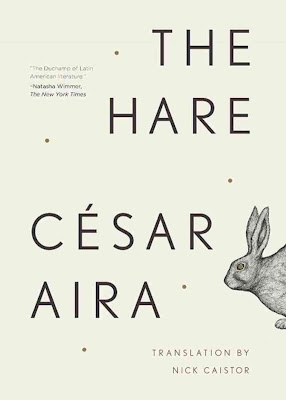 "To love the novels of César Aira you must have a taste for the absurd, a tolerance for the obscurely philosophical and a willingness to laugh out loud against your better judgment. His latest novel to be translated into English, The Hare, is set in the Argentine pampas at the end of the 19th century.
But don't let any veneer of realism fool you. Despite its gauchos, Indians and lyrical descriptions of Argentina's sprawling plains, The Hare doesn't approach the accuracy of An Episode in the Life of a Landscape Painter, Aira's last pampas novel to be published here. It's more like an episode of Star Trek, crossed with Lawrence of Arabia."
— OPB (via NPR)
Read more…

"The ultra-experimental, madly prolific Argentine novelist César Aira doesn’t believe in explanations. Not surprisingly, his third novel translated to English, How I Became a Nun, puzzled some U.S. reviewers. The book begins with a hilarious episode in which a child is disgusted by a first taste of strawberry ice cream. In the span of its ensuing 120-odd pages, the novel describes a 6-year-old child’s anxieties, delusions, metaphysical discoveries and rites of passage, including a first friendship.
...critics praised the book’s dark humour, its elegant prose, its inventive subversion of reality, but they asked—what is this all about? They wanted a justification, an explanation or contextualization that might make the novel, as the second critic put it, 'a credible story.'
But that is exactly what Aira’s brief but extravagant books tend to avoid delivering. In fact, Aira has staked out a very cogent and immensely influential (in Latin America) artistic position that basically says 'storytelling at its finest avoids explanations, information, interpretation, etc.' In a series of 1988 lectures delivered at the University of Buenos Aires, Aira was clear on this point: 'The real story, which we have grown unaccustomed to, is chemically free of explanation. . . . The story is always about something unexplainable. The art of narration declines as explanations are added.'
Aira says that when he sits down to write his daily page or two, he writes pretty much whatever comes into his head, with no strictures except that of continuing the previous day’s work. (The spontaneous feel of his stories would seem to back up this claim, but I’ve always asked, can anyone write as well as Aira does while simply letting the pen ramble?)"
— Marcello Ballvé, The Quarterly Conversation
Read more...