"... However, readers who pick up Nineteen Eighty-Four because of the current worries over the Prism programme would be wrong just to see it as a novel about the dangers of overweening technology.
The all-seeing telescreen in the corner of the room is an important device for allowing the state to exercise control, but Orwell's real concern is about far more insidious threats to liberty. The Big Brother state aims at nothing less than the control of language and thought. According to the slogans repeated by the Ministry of Truth, 'War is Peace, Freedom is Slavery, Ignorance is Strength.' Deprive people of the words with which to resist, and you will crush resistance.
In Nineteen Eighty-Four, Winston Smith's defining act of rebellion is to keep a diary, to attempt to record his thoughts and feelings accurately – not easy when the expressions you need have been obliterated or perverted. The greatest inhibition, to use Senator [Bernie] Sanders's word, is mental rather than physical."
— The Guardian 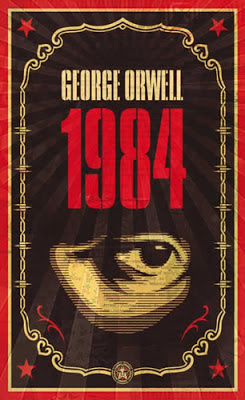 "German, British and Japanese scientists were able to 'read minds' using sophisticated functional magnetic imaging (fMRI) and computer programs.
Current Biology reported people were asked to think about adding or subtracting — scientists were able to read intentions in 70% of cases….
Professor Colin Blakemore, director of the Medical Research Council, said: 'We shouldn't go overboard about the power of these technologies at the moment.
'But what you can be absolutely sure of is that these will continue to roll out and we will have more and more ability to probe people's intentions, minds, background thoughts, hopes and emotions.' He added: 'Some of that is extremely desirable, because it will help with diagnosis, education and so on, but we need to be thinking the ethical issues through.'"
— BBC News
Read more…
Posted by Elora Writers Festival at 6:02 AM