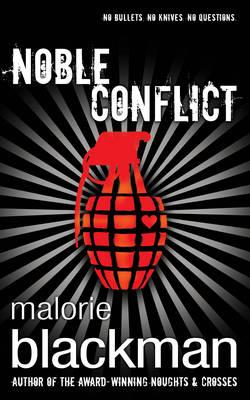 "By the time Malorie Blackman read a work of fiction featuring black characters, she was 23. The book was Alice Walker's The Colour Purple, set in the American south in the 1930s, and its impact on her was huge. Blackman was then working as a computer programmer, having given up her childhood dream of becoming an English teacher after the careers adviser at her London grammar school put her off. But she still read children's books, and in her spare time began to write her own, and imagine they might one day be published….
This week Blackman, now 51, was named the eighth children's laureate, a position she inherits from mega-selling Gruffalo author Julia Donaldson and will hold for two years. At the announcement of her appointment in London on Tuesday, a few days before publication of her latest novel for teenagers, Noble Conflict, she looked delighted. 'I think younger children have been incredibly well served by the laureates we've had, but maybe teenagers haven't had as much of a look-in, so I'm looking forward to redressing the balance,' she said.
Blackman is also the first black laureate and a forceful advocate for black and ethnic minority children's needs and rights. In making up her mind to write about black people in 1980s London, she grabbed a baton previously held by African-American pioneers including Alice Walker and Maya Angelou, who in the 1970s and 80s did so much to popularise writing about black people's lives."
— Susanna Rustin, The Guardian
Read more…