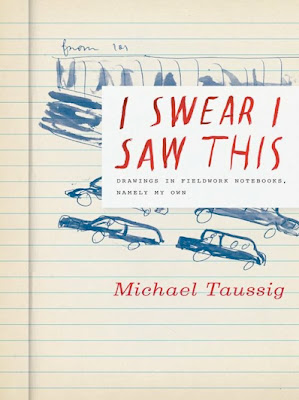 "Six years ago, on a balmy afternoon, the anthropologist Michael Taussig was taking a cab ride in Medellín, Colombia’s second largest city. As the taxi sped into a freeway tunnel, he spotted a homeless couple at the side of the road, caught between the hurtling traffic and the wall of the concrete underpass. In that momentary glimpse, it seemed as if one figure, a woman, was sewing the other, a man, into a nylon sack. 'Why do they choose this place?' he asked the driver. 'Because it’s warm in the tunnel,' the driver replied. Taussig made a note in his notebook, drew a quick sketch, and scrawled underneath it in red pencil, 'I swear I saw this.'
This brief vision forms the kernel of Taussig’s new book, a narrative that, even when circling away to the streets of Paris or the souks of Tangiers, continually spirals back to the figures by the roadside, the nylon bag, and the passersby. There is, of course, a rational explanation for the scene rooted in everyday politics.   Most likely these were peasants driven from their home by paramilitaries who, under the guise of hunting down terrorists in Colombia, are helping the landowning cocaine barons and bio-fuel mafia get their hands on potentially rich agricultural land. In the past 10 years, paramilitary units have been responsible for an estimated 140,000 deaths, and over one million rural inhabitants have been displaced from their land. Meanwhile, Alvaro Uribe Vélez, the president who set up one of the largest paramilitary units in the country, has been awarded international honors by George W. Bush and Oxford University.
[...] The other kind of anthropologist is more like a religious initiate, participating fully in the culture in which he is placed and intimating that he is then the possessor of some secret knowledge. Like an initiate, he cannot anticipate any 'outcomes' before they happen but must simply live in the moment and immerse himself in the local customs and values.
It is this latter tradition of which Michael Taussig, an eminent professor at Columbia University, is one of the greatest exponents. The New York Times has called his work 'gonzo anthropology.'"
— Jennifer Wallace, Los Angeles Review of Books
Read more...
Posted by Elora Writers Festival at 6:54 AM