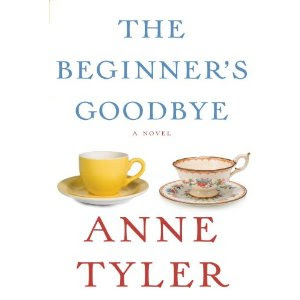 "When you pick up a novel by Anne Tyler, you can expect certain things. It will be set in Baltimore. It will follow families populated by out-of-step characters ranging from the slightly odd to the wildly eccentric, whose actions, or non-actions, are motivated by a need for love and tangible sense of self; this need is sometimes conscious, sometimes not. It will have a provocative, often seemingly contradictory title — The Accidental Tourist, Saint Maybe, The Amateur Marriage, Breathing Lessons. It will be a pleasure to read.
The Beginner's Goodbye, Tyler's 19th novel, features all of these things and more — there is a ghost — and less; just over 200 pages, it is, both in literal weight and narrative complexity, lighter than most of the Tyler canon. Which should not be construed as 'less,' at least not in the pejorative sense of the word. In many ways, "Goodbye" feels like the center slice of an Anne Tyler novel, a distillation."
— Mary McNamara, Los Angeles Times
Read more...


"The story goes like this: Aaron Woolcott’s wife, Dorothy, is killed when the oak tree in their backyard falls on their house, knocking over an old Sony Trinitron television, which crushes her chest. Shocked and grief-stricken, Aaron buries himself in work; he is an editor at a small publishing house that specializes in books like The Beginner’s Wine Guide, The Beginner’s Monthly Budget and The Beginner’s Book of Dog Training. He moves in with his sister and settles into a glum routine. That is, until he starts receiving mysterious visitations from Dorothy’s ghost."
— Michiko Kakutani, The New York Times
Read more...