Linden McIntyre on "The Bishop's Man"

Posted by Elora Writers Festival at 3:43 PM No comments:

Posted by Elora Writers Festival at 3:38 PM No comments:

Here's a great article from David Lewis Stein (The Star) that puts it all in perspective: 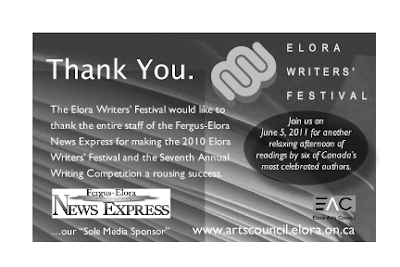 This year the Elora Writers’ Festival turned out to be a truly exciting afternoon of readings, Linden MacIntyre, long-time co-host of CBC Television's The Fifth Estate read from his Scotiabank Giller Prize-winning novel “The Bishop's Man.” (It was also awarded the Dartmouth Book Award for Fiction and the Atlantic Independent Booksellers' Choice Award.)

The Elora Writers’ Festival also featured readings by celebrated authors: Terry Fallis, (His self-published debut novel "The Best Laid Plans" was awarded the Stephen Leacock Medal for Humour in 2008 and has been chosen by Waterloo Region as its 2010 selection for One Book, One Community); Bonnie Burnard; Pasha Malla; Ray Robertson; and Barry Dempster.
The venue for this year’s event was, once again, Heritage River (25 Wellington Dr.) at the top of Cuthbert Street in Elora.
Tickets ($15.00) were available at the door, or at Roxanne's Reflections Book & Card Shop, 152 St. Andrew St. West, Fergus (Phone: 519-843-4391).


For information about the Young Writers Contest, go to:


and for the 2010 Elora Writers' Festival Writing Competition, go to the Elora Arts Council web site.


Thanks again to our loyal sponsors: