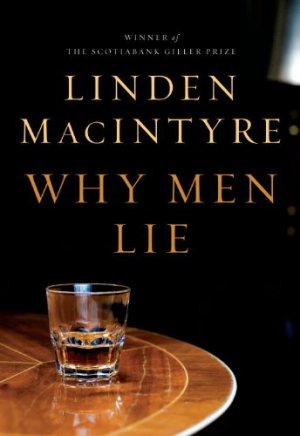 "The follow-up to [Linden] MacIntyre's 2009 Scotiabank Giller Prize winner The Bishop's Man, the newly published book [Why Men Lie] follows 50-something professor Effie MacAskill Gillis as she reflects on past and current relationships with men, from her frightening father to her ex-husbands and her priest brother.
MacIntyre, 68, admits he first tackled the story from a man's point of view in an effort to explore middle-aged male preoccupations with impotence of all kinds, but 'it just did not work.'
'It didn't come together, and it was only after a long, long struggle that I realized men aren't credibly conscious of what makes them what they are. They don't have that much self-knowledge, self-insight into something as intrinsic as that, and I just wrote it off as a failed idea.'
That was around the time when The Bishop's Man hit shelves and went on to win the Giller, which MacIntyre wasn't expecting and which brought 'a lot of great expectations.'
As MacIntyre met with readers of The Bishop's Man, he fielded many questions about its two strong female characters, Effie and Stella, and that provided the spark he needed for his next book."
— Victoria Ahearn, The Canadian Press (via News1130)
Read more...

Get Linden MacIntyre's new book... and tickets to the 2012 Elora Writers' Festival here...

Check out this year's outstanding lineup of authors here...

Posted by Elora Writers Festival at 9:13 AM