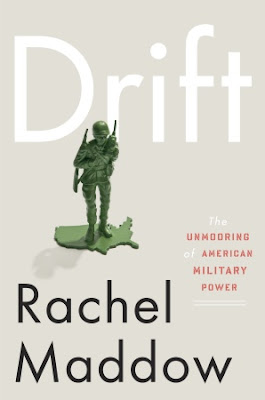 "A book by the host of a political talk show is often an ancillary product or marketing tool. But Drift, by Rachel Maddow, whose show is on MSNBC, is much more. It is an argument — a sustained, lucid case in which points are made logically and backed by evidence and reason. What’s more, it follows one main idea through nearly a half-century. The subtitle, 'The Unmooring of American Military Power,' explains exactly what “Drift” is about.
Ms. Maddow’s point is that the way we go to war has changed: that there has been an expansion of [U.S.] presidential power, a corresponding collapse of Congressional backbone and a diminution of public attention."
— Janet Maslin, The New York Times
Read more...

Buy this book here...
Posted by Elora Writers Festival at 11:50 AM