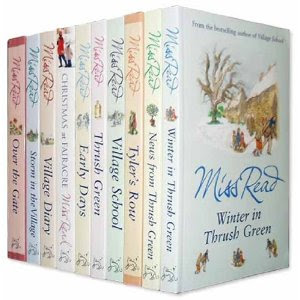 "Dora Saint, a prolific and gentle chronicler of English village life who wrote under the pen name Miss Read, has died at age 98.
Saint died April 7 at her home in Great Shefford, 50 miles (80 kilometers) west of London, the Newbury Weekly News reported.
In 28 novels between 1955 and 1996, Saint wrote of the small conflicts and quiet excitements of life in the fictional villages of Fairacre and Thrush Green. She also wrote 16 other books including two volumes of autobiography.
The first book, Village School, drew on her experiences of village life and teaching. The pen name Read was her mother's maiden name.
A review in The Times said events in that book were small 'but observed with an exactitude, animation, and sense of comedy that recall a Brueghel painting of village folk.'
Saint believed that 'happiness is the result of an attitude of mind.'
'I believe you can build it out of small things, out of hearing someone calling across a garden, a robin in a hedge, a cat in the woodshed," she once said. 'When I hear depressing news on the radio, I can switch off and drift into what is, I suppose, a dream world. I think all people like to look back, not because everything was better in the past, but because often they were happy then.'"
— Associated Press
Read more...
"The parish [Great Shefford] is in the district of West Berkshire, on the River Lambourn. The modern civil parish includes the historical parish of Little or East Shefford, a small hamlet and lost settlement downstream.[1] The tiny Church of St Thomas there contains important monuments to the widespread Fettiplace family. The parish also includes the village of Shefford Woodlands, about 1 mile (1.6 km) to the south of Great Shefford and close to M4 junction 14.
The toponym of both Sheffords is derived from the Old English for 'sheep ford.' Great Shefford village has a public house, school, shop and petrol station, and 896 inhabitants (880 listed on the Millennium Stone opposite the petrol station).
The Church of England parish church of Saint Mary is one of two existing round-tower churches in Berkshire. The other one is at St Gregory's parish church at nearby Welford."
— Wikipedia
Read more...