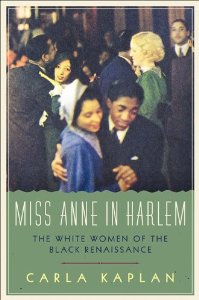 "The poet Langston Hughes liked to wryly describe the Harlem Renaissance — the years from just after World War I until the Depression when black literature and art flourished, fed by an awakening racial pride — as 'the period when the Negro was in vogue.' Note the past tense. [...]
The names of Harlem's heyday are now part of the American literary canon: Hughes; his good friend Zora Neale Hurston; fellow writers Arna Bontemps and Jean Toomer; poet Countee Cullen; and novelists Nella Larsen, Wallace Thurman and Jessie Redmon Fauset. What is far less known are the white patronesses who made much of their work possible.
Miss Anne in Harlem: The White Women of the Black Renaissance, historian Carla Kaplan, who teaches at Northeastern University, introduces readers more fully to those women. ('Miss Anne' is a generic term within the black community for white women, especially those who rely on the privilege of their race. Kaplan's use of it in the book's title signifies her insider's knowledge — as well as her intent to be purposefully provocative.) Many of us who read about the works of Hurston and Hughes, two of the most famous Harlem Renaissance figures, knew that they and other writers had white women who helped support them while they produced their art. But these women were seen as ancillary to the process, referred to in the black writers' letters and papers as the holders of purse strings that, when loosened, allowed the artist to continue his work. Although, as we discover through Kaplan's book, that support was not unconditional."
— Karen Grigsby Bates, Code Switch
Read more… 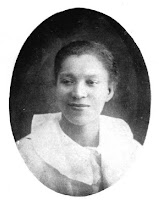 "Langston Hughes and Zora Neale Hurston’s friendship lasted five years and ended in jealousy and perhaps an unrequited love. In the Spring of 1927 Langston was invited to read his poems at Fisk University’s Commencement exercises. From there he planned to do another reading in Texas but the Great Mississippi Flood cancelled those plans.
A change took him South where he ran into Zora in New Orleans. She was touring the South in her own car, collecting materials for research. Together they spent several weeks driving through the rural South collecting folk songs and stories.
They returned to Harlem and Hughes introduced Hurston to his patron the 'Park Avenue Godmother' Charlotte Mason. Under Charlotte Mason’s sponsorship they began to collaborate on a play Mule Bone. Mason hired a third Harlem Renaissance figure Louise Thompson to do the typing for $150 a month.
Zora found Louise and Langston growing a little too cozy. Then one can only surmise by some mischief concocted by Zora, Louise was suddenly fired. Hughes wanted Louise to continue typing and offered to share author credits. Zora opposed the idea and with only two acts completed Hurston packed up and took off on another tour taking the notes and manuscript. Despite his great affection for the Godmother Hughes was feeling controlled, beholden and with his creativity stifled their relationship deteriorated and not long after she cut him off."
— Norwood Holland's Editorial Independence
Read more…

Buy this book, and works by all the writers mentioned in this post here...
Posted by Elora Writers Festival at 11:23 AM