"[…] nature has already constructed the symphony, and we're trying to find what it is." 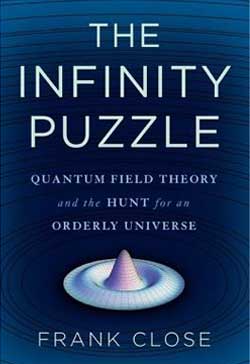 "In his new book, The Infinity Puzzle: Quantum Field Theory and the Hunt for an Orderly Universe, Oxford physicist Frank Close reviews decades' worth of brain-teasing theories and looks ahead to puzzles yet to be solved.
Close traces the decades-long effort to find the deep connections between the fundamental forces of nature and resolve the 'infinity puzzle' — that is, the fact that the mathematics of quantum theory came up with nonsensical numbers. That puzzle was eventually solved, as Close describes in the book, but an even bigger puzzle remains: Why is the cosmos built the way it is?
Some clues could emerge from Europe's Large Hadron Collider, where physicists are looking for a mysterious particle known as the Higgs boson. Close delves into the strange role that the Higgs plays in contemporary physics, but he emphasizes that his latest book is about much more than the science.
'The Infinity Puzzle is not just another story about the physics of the LHC,' he told me this week. 'It's focusing on the people. Science is a pure ideal, but the scientists who do it are people. And we all have the same desires and pressures. ... There are heroes and villains in science, as there are everywhere.'"
— Alan Boyle, NBC News Read more…

"First theorized almost 50 years ago by British physicist Peter Higgs and others, the Higgs boson is the only particle yet to be observed in the Standard Model of Physics, which basically explains how the basic building blocks of matter interact.
'The Higgs field is everywhere around us, and all particles are moving in the presence of this field,' said William Trischuk, a professor of physics at the University of Toronto. All these particles 'interact more or less strongly with it, and they are either slowed down or not slowed down so much and that's what gives them mass.'
'The heavier ones interact strongly with this field and the light ones interact very weakly with this field.'
Trischuk is part of the ATLAS collaboration, which is one of two experiments seeking out the Higgs using the Large Hadron Collider. 'We hate calling it the God particle but the reason it picked that up is because it goes out and touches every other particle and gives them their property, which is their mass,' Trischuk said."
— Jon Hembrey, CBC News
Read more…
Posted by Elora Writers Festival at 7:24 AM