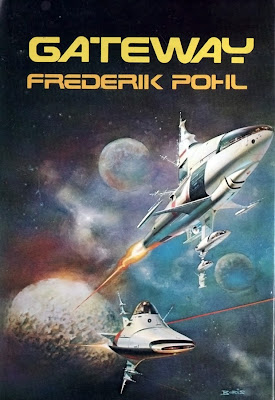 "Author Frederik Pohl, who over decades gained a reputation of being a literate and sophisticated writer of science fiction, has died at age 93. His wife, Elizabeth Hull, said Tuesday that Pohl died Monday at a hospital after experiencing respiratory problems at his home in the Chicago suburb of Palatine. News of his death was first announced by his granddaughter, Emily Pohl-Weary, in a tweet.
Pohl wrote more than 40 novels. Two of his better-known works were The Space Merchants, written in the early 1950s with Cyril M. Kornbluth, and 1978's Gateway, a winner of the Hugo Award for science fiction writing. Pohl was a literary agent and editor before getting his own work published in science fiction magazines of the 1930s. He's credited with launching the careers of James Blish and Larry Niven.
'It is difficult to sum up the significance of Frederik Pohl to the science fiction field in few words,' Pohl's editor James Frenkel said in an obituary released by the family. 'He was instrumental to the flowering of the field in the mid-to-late 20th century, and it is hard to dispute that the field would be much the poorer without his talent and remarkable body of work as a magazine and book editor, a collaborator and a solo author.'"
— Herbert G. McCann, Huffington Post
Read more…
Posted by Elora Writers Festival at 7:00 AM