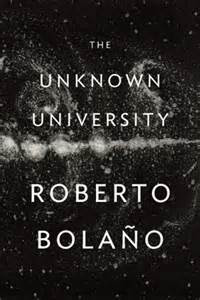 "The great Chilean writer Roberto Bolaño liked to argue, plausibly enough, that poetry is a higher calling than fiction.
He also liked to argue, with no plausibility at all, that he was a better poet than a novelist. 'The poetry,' he said, 'makes me blush less.' Like so many writers, Bolaño (1953-2003) was an unreliable guide to his own oeuvre.
His collected verse, now in a plump, handsome bilingual volume called The Unknown University, has flecks of the intense pleasures contained in his best novels: The Savage Detectives (1998), By Night in Chile (2000) and 2666 (2004). But you will need to pan for these, like someone searching for gold in a river bottom.

Bolaño died too young, of liver disease, at 50. Before his death he had time to begin compiling this volume and to give it its title."
— Dwight Garner, The New York Times
Read more…

Buy all of Roberto Bolaño's books here...
Posted by Elora Writers Festival at 9:39 AM