"Happiness is a warm gun..." — Lennon–McCartney 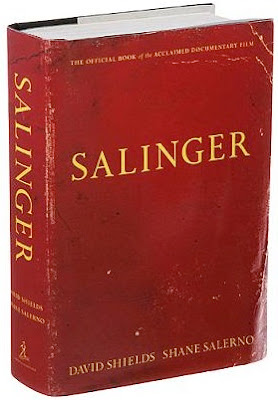 "Sometime in late 1968, Charles Manson was listening to 'The Beatles,' to use the proper name of what’s most often called the White Album, and decided that 'Helter Skelter,' an upbeat rocker about a roller coaster at an English amusement park, was a call to black insurrection in America, to be set off by the brutal murders of an actress, a hairdresser, a coffee heiress, and several other innocents.
The question that this horrible incident has always provoked was not just: How could anyone have thought anything so murderously insane? It was also: Why was Charles Manson listening with such hallucinative intensity to an album whose other highlights were John Lennon’s delicate bossa-nova ballad to his mother Julia, Paul McCartney’s lyrical invocation of Noël Coward, and George Harrison’s mystical celebration of the varieties in a box of English chocolates[…]
These questions come to mind in reading David Shields and Shane Salerno’s heavily hyped biography Salinger (Simon & Schuster), not least because, in one of the most bizarre sections of a bizarre book, they themselves raise the issue of murder-by-bad-reading, in connection with the murder (fearful symmetry!) of the Beatles’ John Lennon by Mark Chapman, who happened to have hallucinated a motive within The Catcher in the Rye. Shields and Salerno’s own peculiar view of Salinger forces them to insist that Chapman was not just a crazy hallucinant, but in his own misguided way an insightful reader, responding to the 'huge amount of psychic violence in the book.'”
– Adam Gopnik, The New Yorker
Read more…